In 2011, after a decade of research and determination, the Dennison Railroad Depot Museum was designated as a National Historic Landmark. The National Landmarks Commission and the National Park Service recognized the Dennison Depot as the most significant remaining example in the nation of a railroad canteen still reflecting its WWII heritage.

The Dennison Depot historically represents the movement of millions of servicemen and women across the United States during WWII and the mobilization of civilians on the Homefront during the period of 1942-1946. During the war, nearly 4,000 volunteers served meals around the clock and provided moral support to 1.3 million soldiers that traveled through the Dennison Depot Salvation Army Servicemen’s Canteen.

Our Landmark Story Begins In 1941

Because Dennison, Ohio was located on the National Defense Strategic Railway Route, the depot was destined to come into close contact with thousands and thousands of service members. The reaction and response of volunteers changed the story from one of simple train transportation to a story that epitomizes the American spirit.

The number of troops aboard troop trains moving across the country by rail was staggering. Each train could carry upwards of 600 to 800 service members. Dennison was a significant stopping point for trains transporting servicemen and women to military training camps, to the west coast for service in the Pacific, to debarkation points in the east for service
in Europe and ultimately back home from service overseas.

The simple necessity of arranging train schedules to accommodate the troops was paramount to our nation’s leaders. However, another necessary issue was make sure they were all well fed. The answer to this tough logistical problem was – Canteens.

Dennison, Ohio – Much More Than A Water Stop

Dennison, Ohio was the water stop on the Pennsylvania Railroad (PRR) halfway between Pittsburgh, PA and Columbus, OH. The railroad yards and shops were one of the finest examples along the PRR. For the operation of steam powered trains, this stop was mandatory. For the operation of a Canteen, it gave volunteers five precious minutes in which to serve the troops while the trains were being filled with water.

A Cup Of Joe And A Slice Of Home

The idea of a Canteen serving food to military personnel was happening all across the country. Each Canteen became a proud symbol of the war effort on the Homefront. Dennison had the esteemed privilege of being both a WWI and WWII Canteen site, as well as a recognized standard of Canteen Operation that inspired and led other communities to action. The State of Ohio had 12 Track Side Canteens, the largest number in the country.

Started locally by Lucille Nussdorfer and later supported by the Salvation Army, volunteers from eight counties answered the call to work. Every volunteer took their job seriously, so the Dennison Canteen never closed nor ran out of money or food.

1.3 million soldiers were served free food at the Dennison Salvation Army Servicemen’s Canteen. 3,987 Volunteers contributed 601,520 hours of service and raised $1,319,439 to operate the Canteen nonstop from March 19, 1942 to April 8, 1946. Thousands of cups of coffee, sandwiches, pies, cakes, cookies, donuts, lollipops, candy bars, pieces of fruit, gum, magazines and Christmas packages were passed out. In all, 13% of all armed services personnel came through Dennison, Ohio. 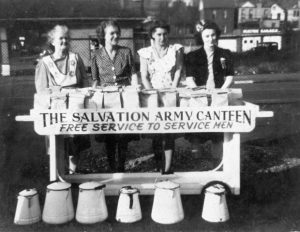 They Called It Dreamsville, USA

If you were a soldier, leaving the “farm” for the first time in your life, facing wartime service, feeling afraid and homesick, uncomfortable in a cramped overcrowded train with no air conditioning, and hungry with little or no money – pulling up to what appeared to be small town USA, with pretty girls that reminded you of your mom, your sis, your sweetheart, giving you FREE food – it was like a dream come true.

This is how Dennison got its nickname – Dreamsville, USA. It was an idyllic respite and a reference to the peaceful vision of small town America in a 1941 Glenn Miller song titled “Dreamsville, Ohio”, home to “the sweetest moments you’ll ever know. This was the America the servicemen and women were sworn to protect and this was the image Dennison projected.

As the third largest Canteen in the country, the Dennison Salvation Army Canteen created an American experience that was talked about at home and abroad. The two larger canteens located in North Platte, Nebraska and New York City’s Stage Door Canteen exist today only in memory and legend.

Today, the Depot has been completely restored – right down to the stained glass windows which have the original black paint around the edges from the black-outs of WWII. The Dennison Canteen symbolizes the nation’s unity and support for the troops throughout the war and the efforts of the many volunteers.

By 1968, the last passenger train stopped at the Dennison Depot. In the late 1980s, the last freight train stopped and Conrail was planning on pulling up the tracks and tearing down the depot. In 1984, a grass roots community effort rallied and saved the building from demolition and restored it into a living, breathing center of pride, history, education and economic development.

The Depot, built in 1873, is the only former railroad structure still standing in Dennison. It is a significant representation of over 100 years of interlinked history of the founding, growth and development of both Dennison and the Pennsylvania Railroad.

Our history is rich and our story is inspiring. We are proud to be a National Historic Landmark.

The Museum showcases many topical exhibits and promotes many special events. It is committed to collecting, preserving, exhibiting, interpreting and educating visitors on Dennison’s rich railroad and WWII history.

The same Homefront hospitality that the service members found during WWII still exists today. When you visit the Dennison Railroad Depot Museum, you will be greeted in the lobby with a free hot cup of coffee and a cookie, in memory of all the soldiers that stopped there. And we think you will leave Dreamsville, USA just as happy as they did.

Won’t you come with me to Dreamsville? 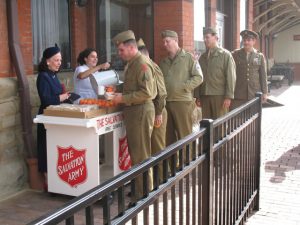