Rare WWII Military Hospital Car, one of only 6 left in the country. Recipient of “Save Americas Treasures” grant. In addition to SAT dollars, this car was sponsored by the Renner Foundation. 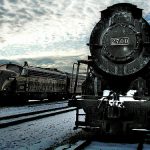 The 2700 Engine, first in its series of Kanawha Chesepeake & Ohio Engines, built in the 1940’s. The Engine was brought to Ohio by S.T.E.A.M. from West Virginia, and was displayed on the Esber Beverage Spur in Canton, Ohio near Timken. It was relocated to Dennison, Ohio where it was stored for years, until finally moved to the head of a track that houses a wing of cars to the Dennison Railroad Depot Museum. Transportation Enhancement Funds were secured to restore the Engine, but the restoration was delayed due to a lawsuit over the Engine ownership. Two court cases have since confirmed the Dennison Depot as owner, and a cosmetic restoration of the Engine was completed in 2018. 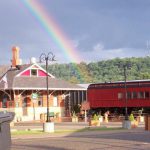 An image of the business car before it’s restoration. The Times Square ‘s restoration is complete and the car is now used as a Business Car, Exhibit – meeting – reception – meal space. It opened to the public in November 2012, and is currently available for rentals. An ODOT Transportation Enhancement Project funded 80% of this project’s restoration, with matching dollars coming from a sponsorship by the Dennison Rotary Club. This car was donated to the Depot from our friends at the Ohio Railway Museum in Columbus, Ohio. 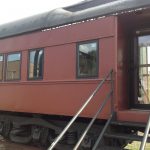 The Pullman Sleeper, another donation from the Ohio Railway Museum, is currently undergoing restoration. The exterior is a Transportation Enhancement Project and is completed. Funding is still being sought for interior restoration. This car will become a much needed Bed & Breakfast Car for the Museum. Naming rights are still available for this car.