A Short Story about Bing

His skin was whitish-grey  with a few hints of black sprinkled over his muscular body; most noticeable was the black spot around one eye. He had his helmet, his German blanket and his harness. The harness, standard military issue, was festooned with foreign coins. Even though he had been gassed twice, He was eager and prepared for work.  His nose was engorged and ready for action.  The  glands in his nasal cavity were set for high olfactory performance; you could see the look of expectation in his immense, brown eyes.  His handler also stood ready  as they began the trek over treacherous roads; treacherous for both the terrain and the landmines.

Military working dogs were put into service during WWI and WWII and were used to help detect and fight the enemy. Bing was  a service dog who was assigned a military number and service book. His life began in June of 1918 when Bing, at 9-days old, was smuggled on board a ship in the pocket of an overcoat.

Members of the Dennison-Uhrichsville(Ohio) Company H reached Camp SheridanAlabama in December of 1917. Having been forced to leave their previous mascot behind, at their former camp, the three Grey brothers from Dennison found their new mascot, the white bull dog with a black spot around one eye who was destined to become one of the most famous World War I veterans Dennison every had.

After basic training of the Company D, of the 136 Machine Gun Battalion were sent to the Western Front.  Bing quickly learned how to deal with combat situations, going into the ditch when shells would fly over. . He served in active duty, spent 58 days in the trenches and received two citations for bravery and was given two wound stripes.  .  He was gassed twice and he developed spots on his body where his hair fell out.  Bing came back from war with yellow teeth; a side affect of the gas. For his efforts he received a service record and the regular $68 bonus for discharged soldiers.

When he arrived back in Dennison, Ohio, in March of 1919, he lived with the Gray Brothers, members of the Company D. Bing died in Dennison in June of 1930 and was stuffed by a taxidermist.  For several years, he was on display in one of the local VFW meeting rooms.

Bing’s helmet and cape can still be seen in a special display at the Museum.  His remains were reportedly laid to rest in the Soldier’s plot,(a human cemetery)  in Union Cemetery, in neighboring Uhrichsville, Ohio on Memorial Day.   Unfortunately, there are no records of the exact location. 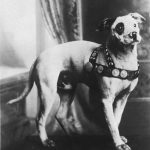